Demo Material on the Vault

I have posted a small demo campaign on the vault. This demo includes the relationship system and feats. I still need to complete the companion conversations with checks when adding or removing members in relationship extremes (hatred and inseparable). There is also the half-fiend as a playable character with racability feats that are given as they level up and the tintable quasit. Several of the half-fiend feats still need some work, one being a blank script and two others still need some more testing, but the half-fiend will now be able to desecrate holy spots. I have an ipoint that if it is is the area of effect it will identify any alters and the script will destroy them then fire off a second script. The second script will be unique to each ipoint so if you go and destroy an alter in a temple of helm all the clerics and paladin will attack you.
I originally had no intention of going and releasing this material separate from the game so there may be issues with reserved lines in the 2das.

So again I am posting that progress is being made. For the Past, oh... long time, I have been working on caverns and ruins. A while back I made a medium size area for a side quest and following whims and just plain old craziness during the area design I started added cave openings in the cliff walls that surrounded the area. I wasn't really paying attention to what I was doing or more importantly the consequences of what I was doing. When I was done I realized that I had 12 cave openings in a single side quest area. So several other quest have been added so these are not a bunch of random nothing caves. This area isn't part of the main quest and the story will not be broken if it is missed, though after all the time I've spent here I hope it isn't missed. Decisions made in this area will have some effects that carry into the main plot and some companion story-lines are also developed here. It has also given me the chance to try somethings that I have been thinking of but had nowhere to place them. This story is really being developed as it progresses. It has a main outline of the plot and major points in the story but there is a lot of freedom and room for growth in the story as it goes from point A to point B.

The first several caverns were fairly standard with several having multiple entrances (trying to use up some of the cave openings.). But as design went on the caverns slowly became slightly larger and started to develop darker stories. I am sure some of this had to do with my choice of music while working on the toolset, Nick Cave is slowly becoming one of my favorite modding artist.

Below is a series of screen shots of various areas in these caverns of DOOOOOOM. 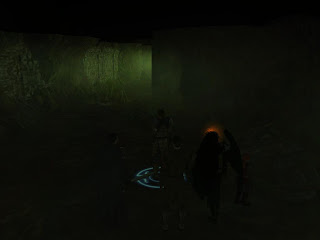 Green glowing fog......what could possible go wrong in an area like this? 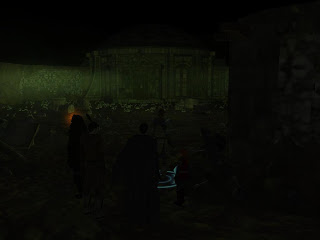 This is a different set of ruins accessed through, yes one of the 12 caves. I took full advantage of the broken and destroyed furniture to build this area as well as all the skeletal corpses. I tried to give it the look of a plundered mountain stronghold. The dead occupants had made numerous barricade points of piled up broken furniture during their last stand. 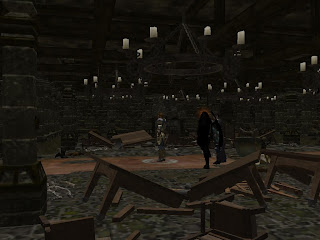 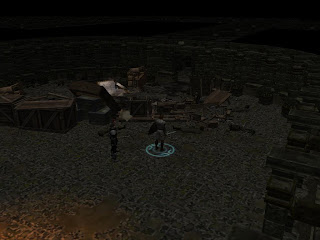 Every set of ruins needs a ghost who is willing to talk to you and shed a little insight on the history while maybe even give you a quest or something like that. This is the second ghost to appear in my mod. The other ghost is much taller and skinnier but they both have distorted scales. My ghost also have a single color in varying shades for their tints. 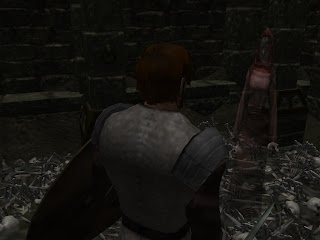 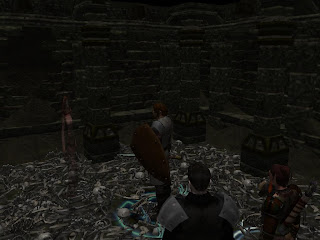 This is a maze that you may encounter, it is made of many single tile rooms with 1 to 4 doors each. Whenever a door is open there is a 25 percent chance for zombies to "pop out" of the floor in the new room and your room, then the door behind you closes. The area disables your companion's on blocked scripts so they don't go around opening doors causing other doors to close and possible spawning in an obsene amount of zombies. My first test of the area went horribly wrong with 4 companions running around opening any door they could find trying to get to zombies. 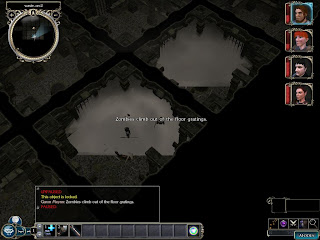 And finally here are some screen shots of some older areas just to prove that this game isn't going to be all doom and gloom crawling through dank dungeons and stuff.
So here is a nice sunrise at a river crossing. 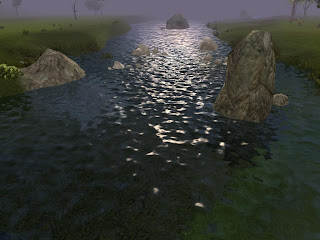 A small house where a fisherman lives with his wife and cow. The House is situated on top of a hill at a bend in the river. This also shows the retaining wall for their little garden. 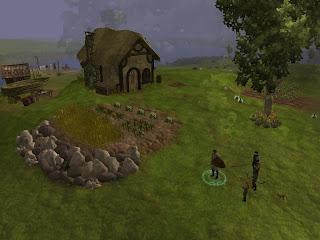 The second module of the campaign is getting closer to completion. Two more areas need to be designed and maybe a half dozen plus conversations need to be completed. I believe most of the scripting has been completed with the exception of one cutscene that will end this module. So once this is completed that will mark approximately the halfway point for chapter 1. So that is where it is now.
at 12:14 PM 3 comments: