Since the last post, I have been working on the swamp overlandmap. At this point I think I have most of the area design all set. May need to reduce a few VFXs to lower some of the memory usage, maybe too many interior tan fogs over the mucky water. I borrowed the OC swamp day/night cycle and just increased the fog and decreased the daytime light intensity.

For the area I tried to maintain a true 1/2 scale, unlike SOZ that uses 1/2 scale for visibility but isn't a true scale. As for creating a swamp it was a true challenge figuring out how to create the land with a workable walkmesh and have minimum dips and bumps. I found what would be nice rolling countryside in a normal area turned into massive hills and holes. After a few different attempts to on how to create the random walkpaths through the swamp I discovered a fairly easy way to do it. I had created all the major points within the swamp first and just had to connect them. I flattened the ground so it was .1 higher then the water, with with a massive brush I used the noise feature at 100%. That created the random low and high points then it was a matter of raising and lowering the terrain to connect the low spots and smooth out the high spots. For doing that I used a inner of 3 and outer of 4 at around 15%. The water is all unwalkable for a couple of reason. The first is there are alligators in there and the second was trying to maintain a walkable height so characters wouldn't disappear just wasn't going to happen.

So now onto the terrain triggers, spawning 2das and whatnot.

Does anyone know of a good overland map tutorial. I search the vault and come up with very little. The official one is garbage and barely tells you anything. Right now I am going through the global scripts and poking through both SOZ and WPM to figure this out.

Below are some screen shots: 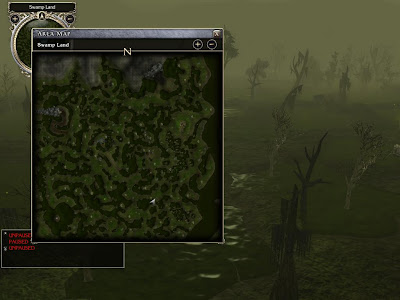 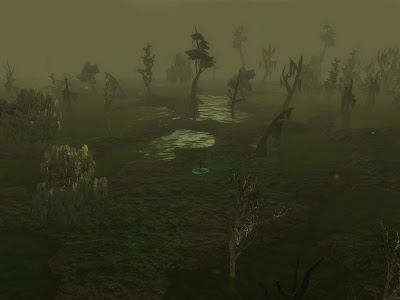 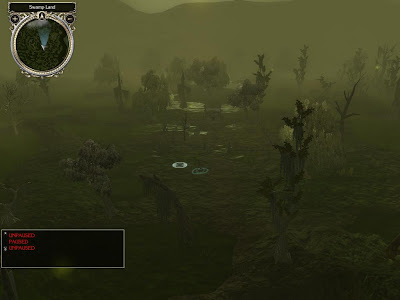 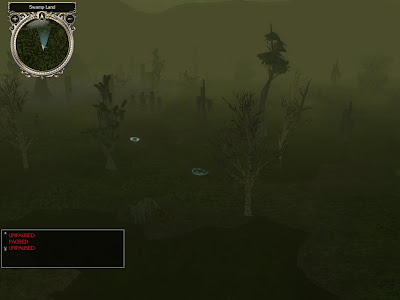 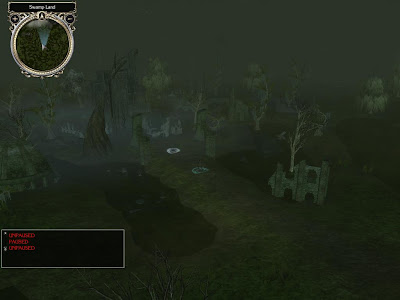 Chapter 2. Back to the toolset

I have mostly wrapped up play-testing kamal's Path of Evil. It was a fun game and should definitely make every one's to-play list. He did a great job creating an evil game. Until this game I always was never able to complete a game playing evil. I definitely plan to use some of his approaches to evilness when creating evil routes in Risen Hero.

Below is a screen shot from Path of Evil. It is the general area from Risen Hero. In the upper left corner you have the Trielta Hills where the Ruined Village was. Then off to the right is the Sunset Mountains, where the monastery and Dor'Gallon's fortifications were. What took a whole game to cross, my character in POE was able to do in 1 to 2 seconds. But then again that guy was a hell of a runner. When I found the scale in the bottom cornor he could run 120 miles in like 4 seconds. 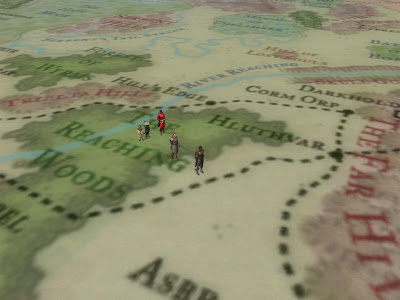 I made a bit more of a suspense or suprise ending to chapter 1 than I originally planned for. But it seemed to fit best in that spot and trying to place it into the beginning of chapter 2 wouldn't have worked as well.

For chapter 2 I am trying to grab the player and bring them right back into the game with the start. You get to return to a familiar area, had to do just a little updating to show the passage of time. The bigger twist I withheld for the beginning of this chapter. I won't give it away, but it was something that was very hard to do and I've been thinking about it for quite a while. I've been trying to see if I could avoid it or change it, but for the story demands it so it is happening whether I like it or not. But enough of that.

First day back and I updated an area, spent a bit of time in the visual effect editor, wrote and scripted 2 cutscenes (still need to do static cameras), created a new club with a on-hit script and a bunch of other stuff. So it was probably one of the more productive times I've had with the toolset. Maybe being away for a month just having this stuff rattle around might have helped.

With chapter 2 I plan on opening up the play, breaking free of the linear play of chapter 1. The player is now more powerful and the marauding army has been broken. The player has more allies and is no longer running for survival. To create a bit more of this free play I am working on a wold map. Yes, a world map, I don't really like overland maps. Too much walking and waiting. You have to load the overland map then trek across it then load the area you trying to go to. If there are wandering monsters you need to load the battle area then reload the overland map. So I will use the world map, click and go.

I do plan on using the overland map but more for individual area. I have a swamp that the player will be mucking through. For that area I am looking at using the overland map. There will be the plot area they are looking for and numerous other areas of interest they can look into. I am hoping to create more of a vast feeling to the area and offer more side quests. The swamp will be similar to the Waste area in chapter 1. A bunch of non-plot areas to gain experience, develop the character and just do and find neat stuff.

An another thing I have been thinking about (but no plans yet) is using the overland map to create a city. It will decrease the time needed to develop the city and reduce resources need to run a full busy city with wandering NPCs yelling out speak strings and such. In the overland map I could see some guards, or other NPCs wandering around to interact with. Then the individual areas accessed through the overland map could be a single street, alley, park or building interior. I think creating a single vibrant street would be much easier and a better experience for the player then trying to create a block or two that have maybe 1 or 2 points of interest and the rest is fluff. I hope to cut down on the 3 dozen NPCs either that don't talk or all use the same random talk tree.