Congrats to the Alphas Out There

It is motivating see others getting ready to move their projects forward and it gives me hope that sometime soon I will hopefully have this out for the community. Since seeing E.C.Patterson and jclef's alpha post I have found myself working a bit more in the toolset, still spending a lot of my free time working on the kitchen and dinning room remodel. The cabinets are on order then it really should just be trimming out the rooms and the flooring.

With the current area I have started to use the coloring tool more. In my past areas I have used it but generally just adding grey shades to define the terrain. I have been experimenting with using much more colors on top of the terrain textures and I am quite happy with the depth it adds. Making mud look wet, trails from run off and just general muck. I am closing in on the end and I am still discovering new ways to do things. Playing this campaign it will be noticeable as I gained more confidence and abilities in area design and scripting. I have gone back a little to touch up here and there so it would be overly blatant as well as improving or just trashing and making all new scripts.

And the area progresses: 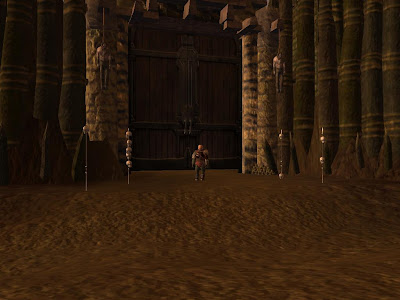 A gate to nowhere good. 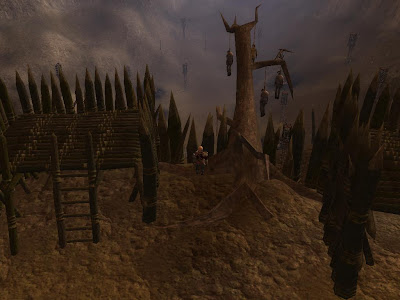 A bit of wholesome carnage 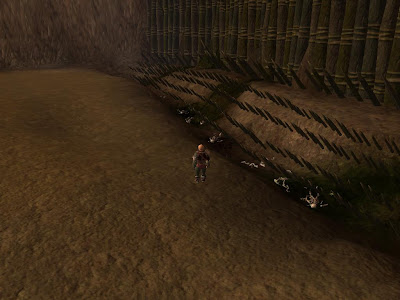 Part of the fortification. 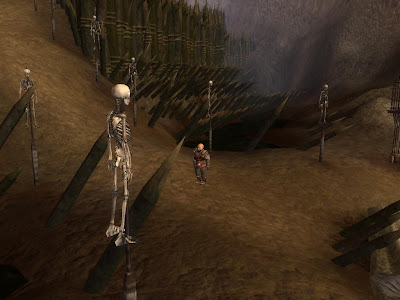 Wet mud with the stagnant water in front of the wall 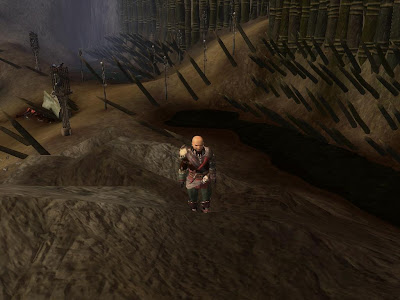 More of the same from the opposite angle.

Back to Some Area Design

I have taken a break from conversations and started working on one of the last two area. A mountain fortification filled with an growing army. The bulk of the soldiers are goblinoids and orcs lead by a Grey Dwarf with the help of minotaurs and ogres to help keep the goblins and such in line.

A bunch of the conversations I still need to complete will be your companions advice on how to infiltrate this base so I figured having the area mostly completed would help with those conversations. There will be three ways through the fort and to reach the commander of the army.

The first and perhaps most difficult will be the stealth approach and will include more problem solving stuff to create diversions and remain unseen. Maybe having you necromancer companion raise some of the dead from the the burning piles outside the fort will be one such an option to hop the first wall unseen but then who knows.

The second will be for those of you who just can't get enough of beating things over the head. While you will not be able to assault the fort you will be able to challenge the champions and fight one on one battles up through the various groups of the army. So if you beat the worg riding goblin champion you get to fight the orc champion until you are fighting in the audience of the army's leader and he brings out some half-breed beast of a creature for you to fight.

The final approach will be talking: diplomacy, bluff, intimidation and probably a few other things as well and being able to asking your companions to jump in and help out. A half-fiend bard would probably excel in a situation like that.

For the fort I have been using Barry the Hatchet Watchtowers . A couple of small to medium sized forests were definitely clear cut in the creation but sacrifices must be made. The walk up to the fort I wanted to show the barbaric nature of it's inhabitants and their lack of value for human life. On the NWN forums Chaos Wielder pointed me in the right direction by using visual effect models and I was able to create rotting corpses standing in elevated cages and skeletons on pikes as well as a dead horse. Using the hanging copses and funeral fires included in the MotB and SOZ blueprints I was able to create a rather ghastly entrance.

So here they are the screen shots. The area design is still in it's early stages. Only three textures have been placed with little blending. Also in some of the screen shots the elevated cages are all funky. For some reason when I set the portcullis (what I used for the walls) to static they revert back to their default scale and when I then uncheck the static box they return to me assigned scale. 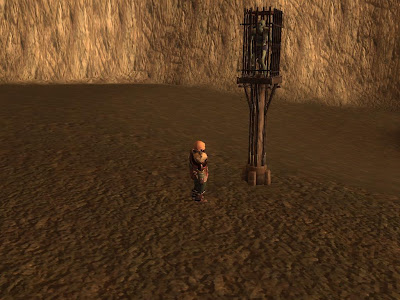 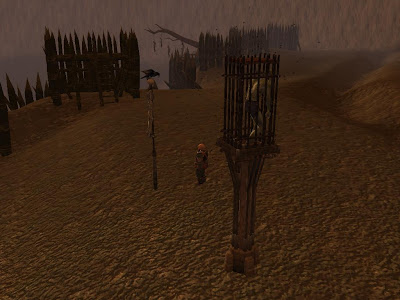 Corpse Cage, impaled skeleton and hanging tree all in one screen shot. 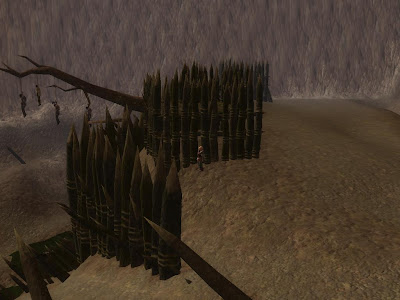 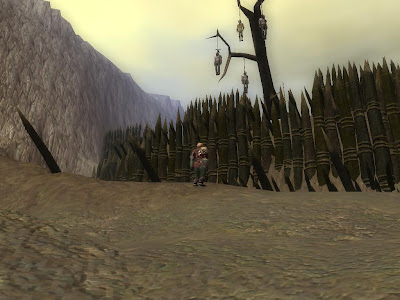 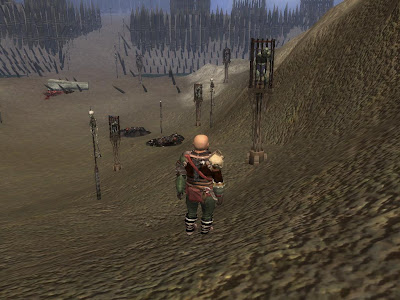 The main entrance with corpses and fire pits placed 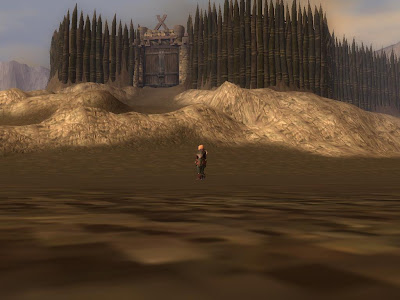 Final gate to the inner walls and the fort's main hall 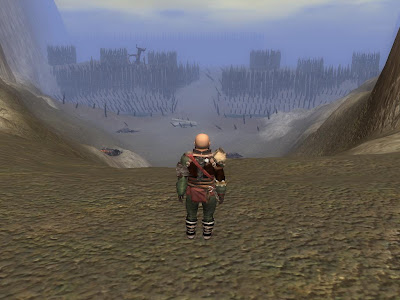 Main entrance, no corpses placed, slightly out of order but oh well. 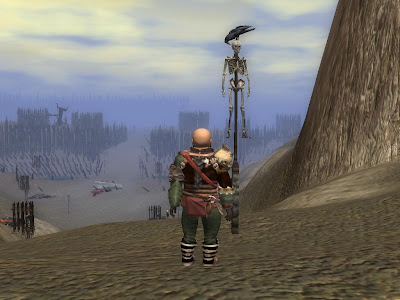 Raven picking any last bit of flesh from the skull 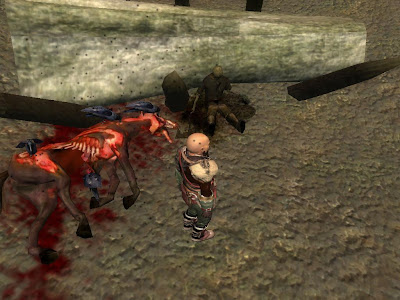 A barricade by the main entrance and a dead horse 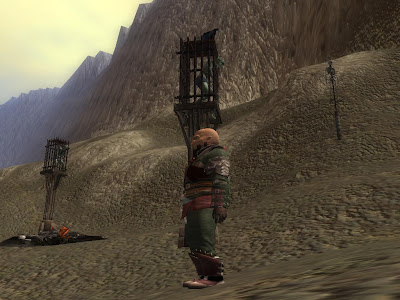 Another view of the cage. Zombie's head sticks out of cage so it's shoulders will be resting against the bars.
at 3:31 PM 3 comments: